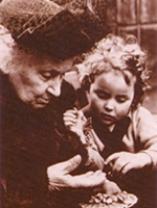 Maria Montessori developed a method of education which is child-centered and a focus on education for life. Dr. Montessori, who was born in Italy in 1870, became the country’s first female doctor. Through her medical background she began working with children. This led to her studies of them, their needs, physical, emotional and intellectual, and thus to evolve her educational method and philosophy. The Montessori environment is designed so children can learn and develop, and their needs are always catered for. The method helps to develop their independence and self confidence, to build concentration and logical thinking. They gain a sense of responsibility for themselves and others. They also gain respect for the rights of others, which fosters their respect for all human beings and is a gift for life. Children teach themselves. This simple, but profound truth inspired Dr. Montessori’s life long pursuit of educational reform, methodology,psychology, teaching and teacher training – all based on her dedication to furthering the self creating process of the child. Dr. Montessori travelled the world during her lifetime, setting up schools, teacher training courses and promoting the understanding of her method. She spoke at international congresses and councils on the subject of education, World Peace and their associations. She wrote many books and many have been written about her and her method. Maria Montessori died in Noodwijk, Holland in 1952, but her work continues on. Today there are many thousands of private and public Montessori schools all over the world. They exist in countries on at least six continents, including Canada, The United States of America, Mexico, Indonesia, Taiwan, Japan, Korea, The United Arab Emirates, Australia, New Zealand, Germany, The Netherlands, The United Kingdom, South Africa, Ethiopia, Tanzania, Peru, Brazil.